Climate X and the Seaweed Solution

This July, Cameron Taylor, Meridian Sales Channel & Market Analyst, had the opportunity to represent the company at the recent Climate X Sprint event. Cameron reports back on the ‘Start up Weekend’ (or ‘Hackathon’) with a specific focus, providing actionable ideas and solutions to help combat climate change.

The Sprint started off with pitching ideas. Anyone who wanted to pitch an idea had just one minute to present. After this we spent some time self-sorting into teams by identifying which idea or initiative we really wanted to get behind.

I was drawn to a slightly odd contender for combating climate change...seaweed. Our team – Kelp Save the World – comprised of an incredible bunch of people including a biochemist, a neuroscience PHd student, a mechanical engineer, a tech start up specialist, an Energy and Carbon emissions expert (lucky us!) and a design and product dev specialist.

Our plan was to proliferate seaweed farming in New Zealand by initially working with existing mussel and oyster farmers and eventually becoming the ‘Fonterra of Seaweed’ (pro tip – Seaweed and Oysters/Mussels have a symbiotic relationship – enriching the yield of both species!).

Seaweed is an incredible substance!

Seaweed grows 30% faster than land based plants, sequesters 2.3x more CO2 than pine, requires no additional fertiliser, feed or watering, doesn’t compete for land with other industries, reduces ocean acidification and naturally sheds 11.5% of its biomass while growing – permanently sequestering any stored Carbon and removing it from the cycle.

Seaweed also has some incredible end-user applications – it is able to be used in agar (petrie dishes), it can be used as a biogas, can be eaten (hello sushi!), is a natural fertiliser – cutting down on nitrates in agriculture and can be turned into PHA plastics that can replace polyethylene, polyurethane and polypropylene. Research is also just coming to light that suggests as little as a 2% supplement of seaweed in cattle feed could reduce cattle methane emissions by as much as 50%! Also, as the emissions trading scheme matures and legislation catches up, seaweed carbon credits could be traded on the ETS.

Where our pitch landed

We took all of the incredible information we'd gathered, validated our ideas by talking to seaweed farmers, world renowned seaweed scientists, the Ministry for Primary Industries and tech start up specialists, ran our carbon calculations and calculated the overheads and potential income to see if we would be profitable (we were – wohoo!).

Finally after three days and some serious intellectual horsepower, we were given five minutes to pitch our idea to a panel of experts made up of WWF CEO Livia Esterhazy, entrepreneur Janette Searle and Climate Change expert Dr Simon Divecha.

Out of the eight teams participating, our pitch WON the Climate X Sprint and was voted the number one choice out of all the impressive work done over the weekend. As part of this victory, 'Kelp Save the World' now has the chance to go into mentor and measure to try and make the plan into a reality.

It was wonderful to be a part of Climate X with the Climate Leaders Coalition and see the pure unbridled passion that people have for combating climate change. Combating climate change is going to take all of us doing our part, wherever we can and the sum of our small victories could change the world. As our host Alan Froggatt said – you’re either on the court, doing the work, or you’re on the sidelines. The choice is yours." 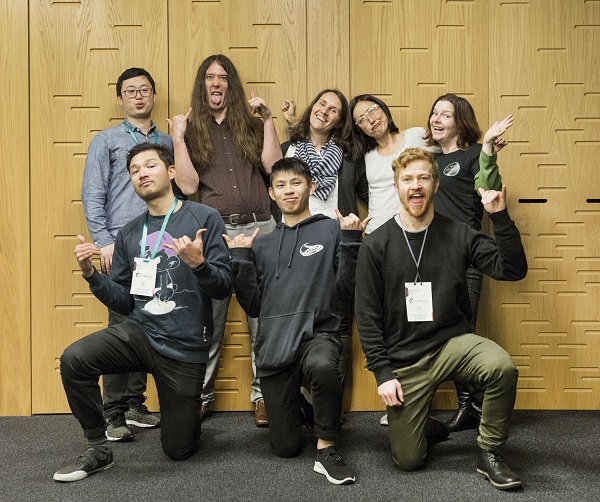 The 'Kelp save the World' team
(Cameron back row, second from left)