Why people are warming to wind farms

Would you support a wind farm in your backyard? There's a lot riding on the answer. 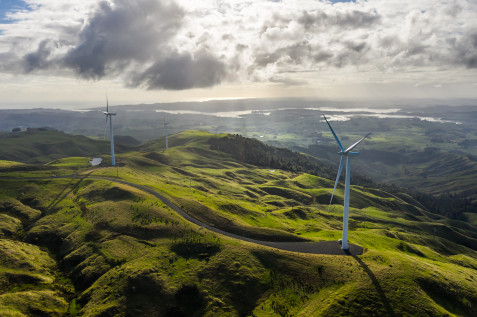 Aotearoa is moving toward a 100 per cent renewable grid by 2030, which means wind power will have to increase 10-fold. The reality is we're going to be seeing many more turbines across the country in the coming years.

Opposition to wind farms is both rational and understandable. Some see turbines as things of beauty and brains, others worry about their visual impact. While the latter are often painted as NIMBYs, research shows their concerns tend to be specific and motivated by a desire to protect their local environments.

But, regardless of where wind farms are built, local support grows as long as communities are listened to, are involved in the projects, and if the local benefits are clearly laid out and understood. The questions we ask ourselves should reflect these benefits.

Would you like greater energy self-sufficiency for your region?

If a wind farm is built in your area, a lot of the electricity it generates will be consumed locally, helping to strengthen local supply, lower transmission costs and smooth the operation of the grid as a whole.

Our recently announced Harapaki wind farm in Hawke's Bay is a good case in point. The region has always been a net importer of energy from the wider grid. Based on historical and forecast load and generation data, we expect Harapaki to increase Hawke's Bay's energy self-sufficiency by reducing the net regional energy import by approximately 40 per cent.

It's good news for the region's 60,000 homes – but greater self-sufficiency is just one reason communities here and overseas are warming to wind farms.

During the construction phase of Harapaki, we'll have a large workforce of around 260 people, including civil and electrical construction crews, engineers, project managers and specialists.

One of the objectives of this project is to employ over 40 per cent of the work force from the Hawke's Bay region. To date, we're achieving just over 60 per cent, which we're really pleased about.

Once fully commissioned, the wind farm will require a small number of regionally-based staff to ensure its efficient operation.

Would you like enhanced recreational opportunities in your region?

This still leaves the question of aesthetics but turbine design has come a long way; wind farms are now built carefully to mitigate their visual impact.

Just as a pattern of growing local support among people living near wind farms has emerged overseas, I am confident New Zealanders can appreciate the unique energy, economic and environmental benefits they bring to local communities.

With this approach, our target of a 100 per cent renewable grid in Aotearoa by 2030 will be that much easier to achieve.

The original article was posted on Stuff on 11 October 2021.